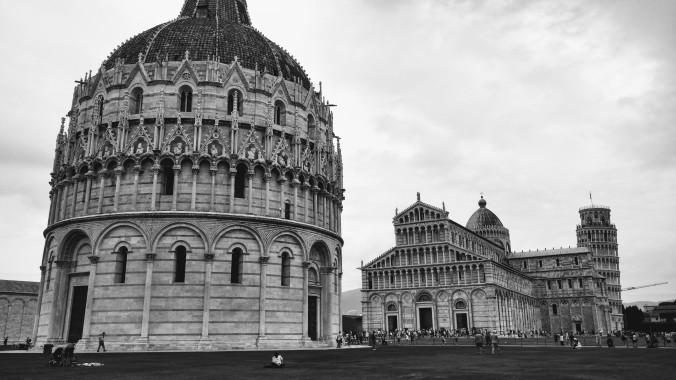 I’ve wanted to see the Leaning Tower of Pisa since childhood. Its scary, yet giggle-inducing, tilt just seemed like something I should witness before its inevitable collapse ‒ not so inevitable, as it turns out. Much more inevitable was getting trampled by the crowds. And being bonked on the head by a selfie stick. Or poked in the eye as hundreds of tourists threw their hands out in a hilarious (sigh) attempt to capture the moment they held the tower up. Or knocked it down. Or got squashed under it. Seriously, the overwhelming memory of my recent visit to Pisa will be of an off-kilter tower surrounded by floating hands.

Yet, steps away from the errant tower, sights existed of which I was previously completely unaware. Miraculous sights, hence the name: ‘The Field of Miracles’. This ‘field’ contained structures of such stunning architecture, I was struck dumb. Those who know me realise this is a big deal. I’m never speechless. But the Duomo, the Baptistry, the Monumental Cemetery, even the ancient entry gate and the surrounding walls, were all breath-takingly beautiful. And … no one trying to hold them up!

(Full disclaimer: these other buildings are not perfectly straight either due to the uneven ground in the area. But compared to the tower, the lean’s not nearly so obvious. But I digress …)

How had I gone through life unaware of these other spectacular structures? I must have seen at least part of them in photos of the tower, right? Apparently not. Which begs the question: why had I ‒ and the rest of the world seemingly, based on crowd patterns ‒ focused all attention on the glaring ‘mistake’? The structure most likely to fail?

As I beat off another selfie stick assault to move away from the tower towards the Duomo, I wondered: was this unhealthy preoccupation with failure whilst filtering out success a metaphor for my life? The answer may be, yes. I can write 100,000 words and wake in a sweat over one typo. I can remember a mistaken action from decades ago yet struggle to recall the good deed of yesterday. I can still cringe at the heartless comment I made in high school and forget the kind word shared today. I know I’m not alone in that. We seem to hold onto failure more tightly than success.

Maybe the roiling crowds around the Leaning Tower of Pisa are a tilted reminder: success is not synonymous with perfection or lack of error. Fail. Get up. Try again. And sometimes let your imperfection show. It may be your imperfection that leads to your greatest success. Just ask Mr. Pisano, credited with designing the tower.