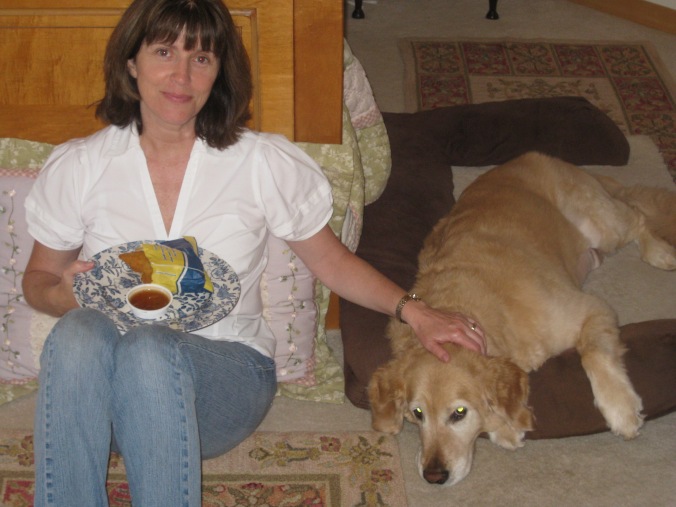 Over the Rainbow Bridge You Go. Named after Basil Fawlty, my Golden Retriever lived up to his namesake. When it came to not quite getting it right, Basil was a champ: couldn’t find a ball if you wrapped it in bacon, let rabbits run right by him, couldn’t get himself the right side of a single wire fence. He once hit a fencepost he hadn’t seen while running at great speed. He did a complete 360 in the air, hit the ground and kept running. The list goes on. We hoped our lives would never depend on his Lassie skills. Brilliant? No. Adorable? Only the most adorable fella ever. Always game for a car ride, a sleep over in a tent full of little girls, a pirate treasure hunt in the woods. He even wore an eye patch. But he’s been gone a while now, felled by the scourge of cancer as a seven-year-old; scattered in the back garden with the rabbits. I miss him every day. As I contemplate returning to England, it still hurts to think of leaving Basil ‒ my soulmate ‒ behind.

It’s been six years since Basil’s passing, and I’m ‘Mum’ to two huge five-year-old canine kids. Duke’s better at the whole rabbit thing, Watson’s fantastic with a Frisbee, and they’ve both stolen my heart as dogs always do. As part of our expat family, they’ll make that journey to England with us, whenever it happens. It will be tough on them ‒ crates and noises and strange smells. But it will be worth it. Family members sticks together, no matter their geographical location, no matter how limited their Lassie skills.

I wrote the following tribute to Basil for a writers group competition. It won. As did Basil. Even when he failed spectacularly. He’ll never really be left behind – with me always.

Slip that collar. Forget that leash. Over the Rainbow Bridge you go. To new rules, no rules, the scent and promise of eternal me.

From now on, barking at nothing is a skill in high demand. Defecating on the lawn is protected under the ‘Right to Bear Down’ Heavenly Amendment. Sleeping on the bed is a given—even if someone’s home. Squirrels fall from trees right in front of you. Fences disappear. They were only ever mirages, anyway. ‘No’? Only at the beginning of ‘No, really, please take more chicken off the countertop.’

Image: The Last Supper: Basil passed away a few hours after this photo was taken.